Picture Jennifer Aniston, and you’ll likely envision her with one of two hairstyles: perfectly highlighted long layers, or that famous Friends bob from the mid-‘90s (which—gasp—apparently she never liked). Both are iconic, and for good reason. But over the years, Jennifer Aniston has had other hairstyles—in fact, she’s experimented with her hair much more than she generally gets credit for. (Which could also be the reason she’s part owner in a hair care brand.) From bangs to spiral curls and messy buns to tiny bows, here are 30 of the most notable styles the actress tried on en route to her signature golden blowout. 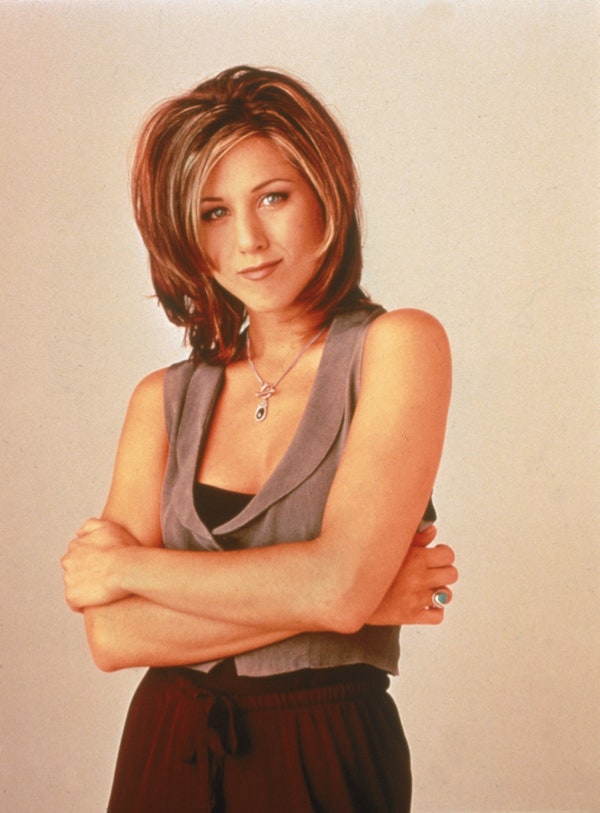 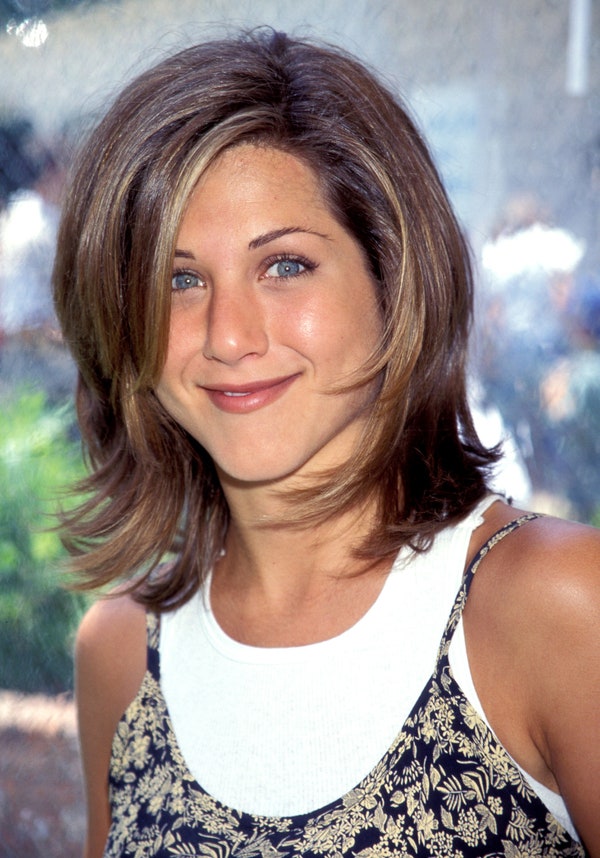 As she rose to fame on the sitcom, her blond-streaked shag grew just as popular among fans, who requested “The Rachel” (named for Aniston’s character) at salons. (Hailey Baldwin, coincidentally, just brought it back.) 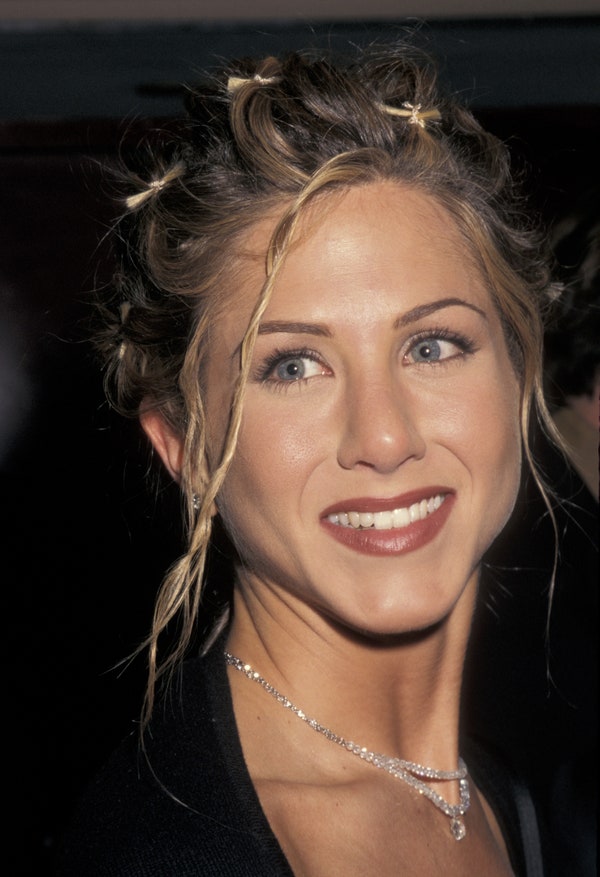 It helped that Aniston made the swingy layered cut look every bit as adorable in real life. 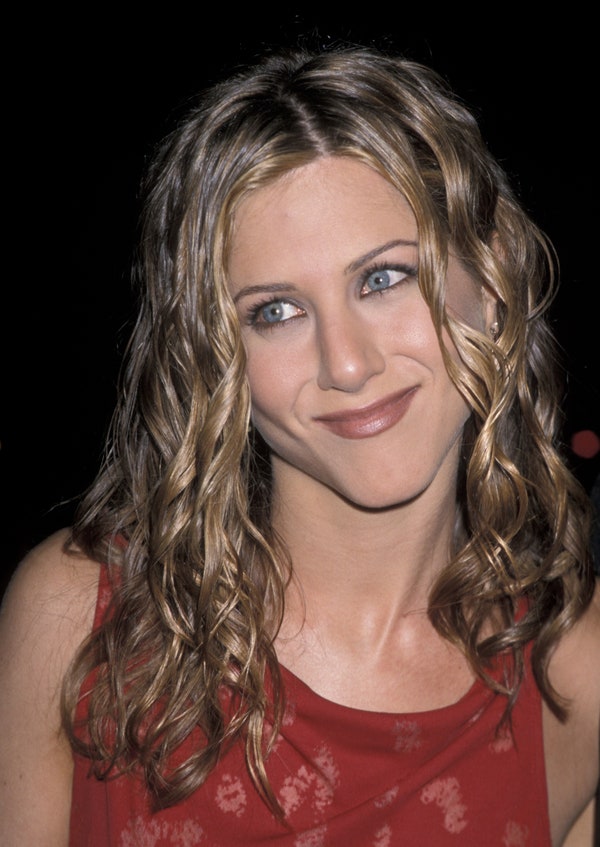 Another oh-so-’90s Aniston-hair throwback: tiny twists and bows and wisps at The Object of My Affection premiere. 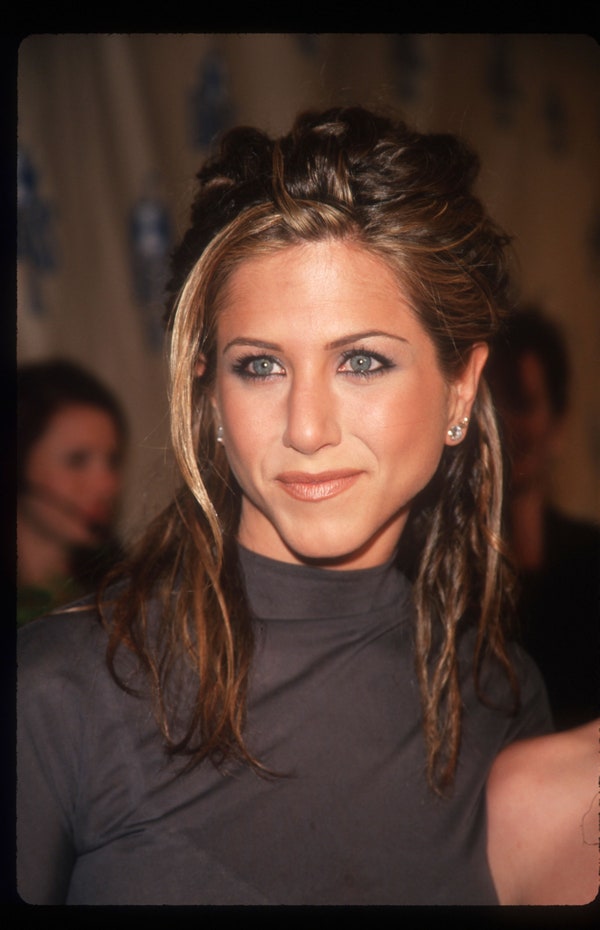 As The Rachel grew out, the actress also played with new textures, like these very Save the Last Dance-like spiral curls… 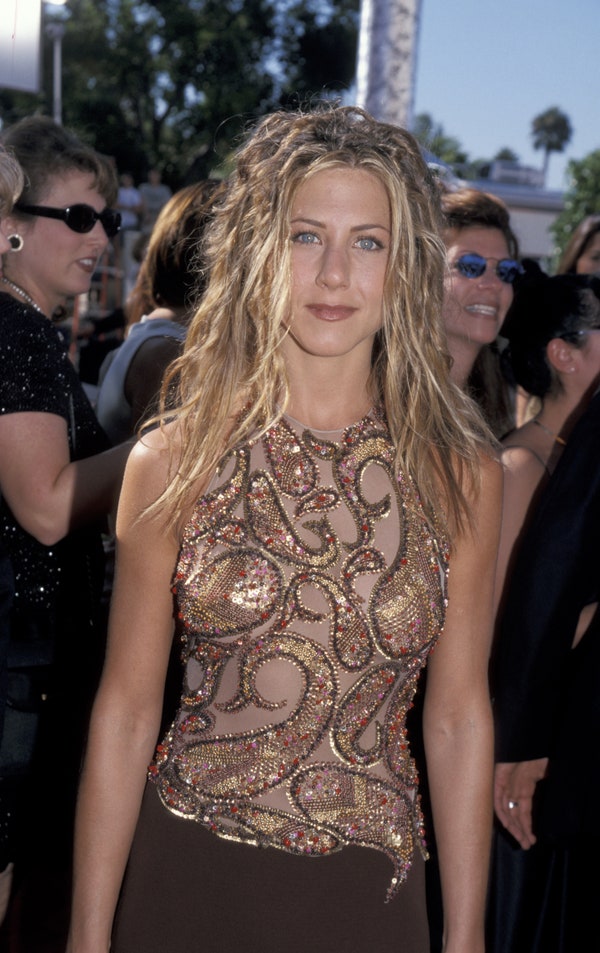 …followed by some wet-look twists at the first VH1 Divas Live concert. 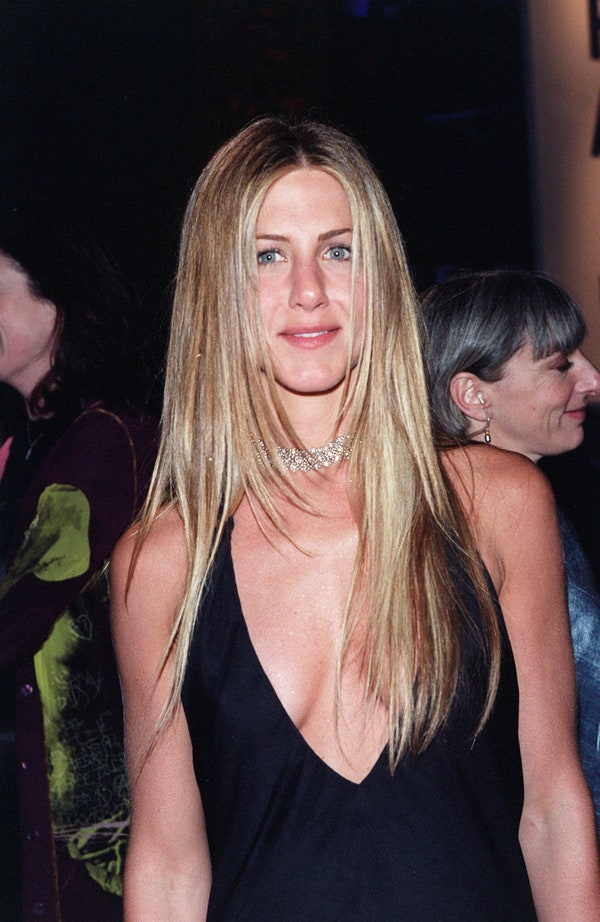 She famously rocked dreads at the Primetime Emmy Awards in 1999—something that’d likely be received much differently today. 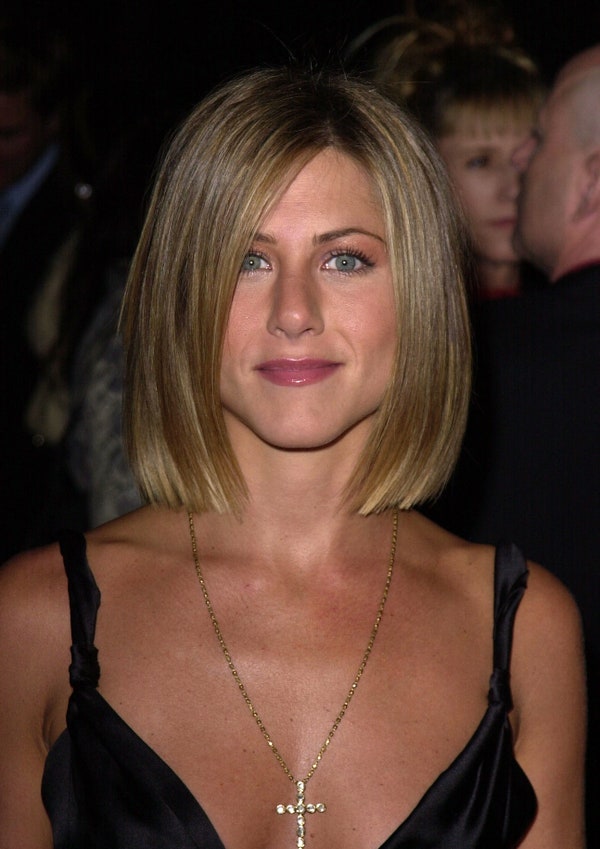 Out with the ‘90s, in with the sleek. Chest-length flat-ironed extensions (paired with a plunging neckline) helped Aniston make a dramatic entrance at the Vanity Fair Oscar party. 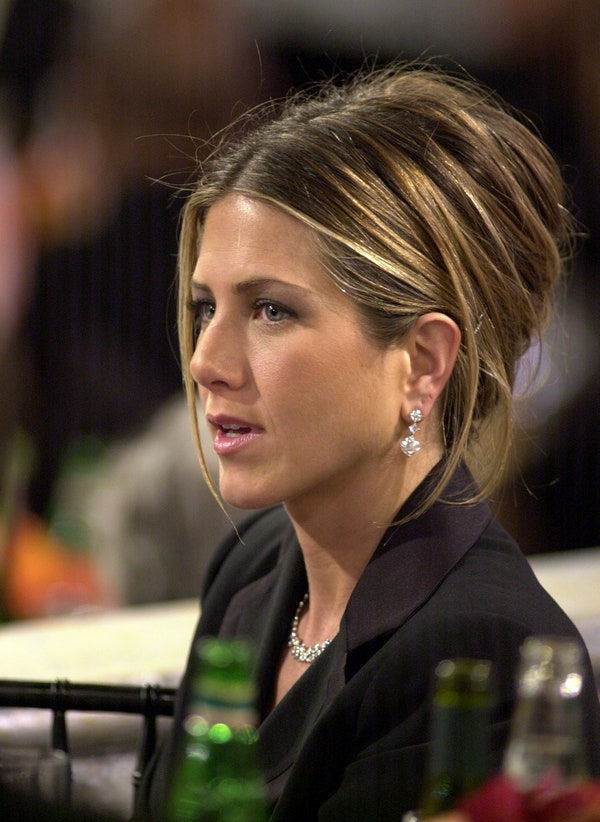 Surprise! Just as straight but much shorter: Aniston showed off a super-blunt bob at the People’s Choice Awards. 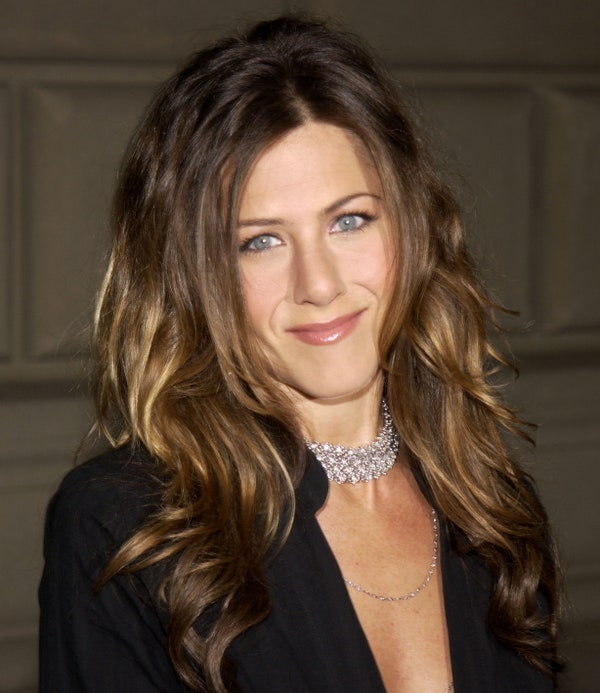 In an uncharacteristically Parisian moment, Aniston paired a black blazer with a sexy French twist at the Golden Globes. 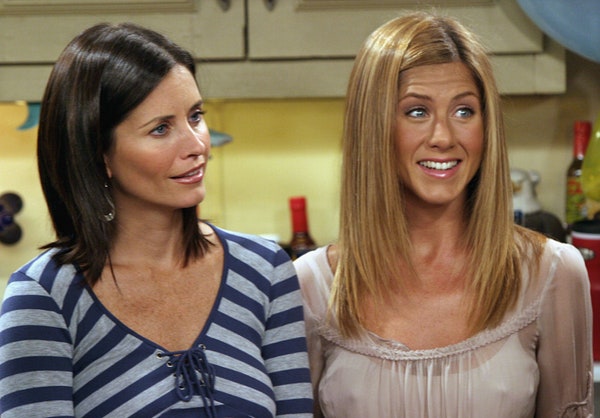 At that year’s People’s Choice Awards, she went for a center part with big, voluminous waves—plus a very early ombré adaptation. 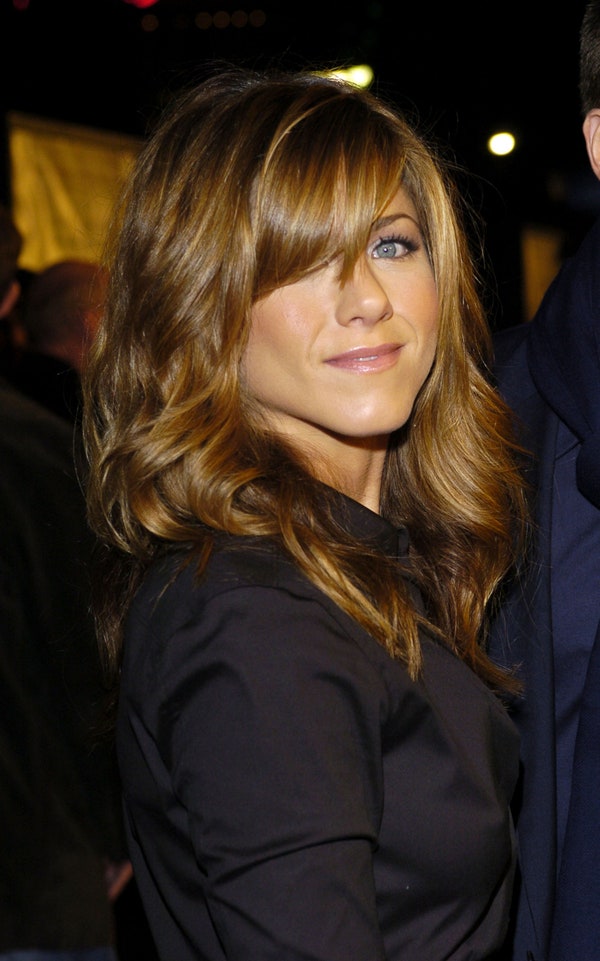 By the end of Friends’ run, “The Rachel” had fully evolved into these longer, less voluminous layers. 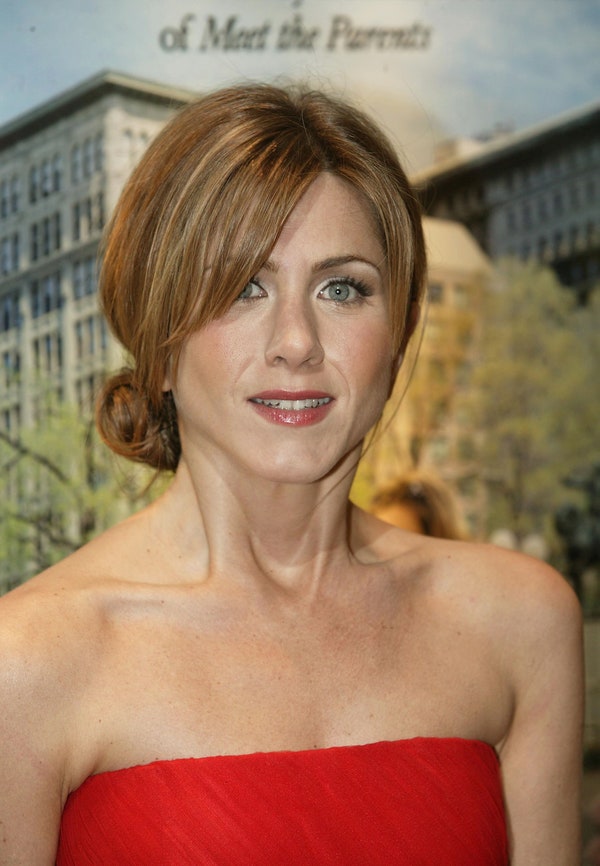 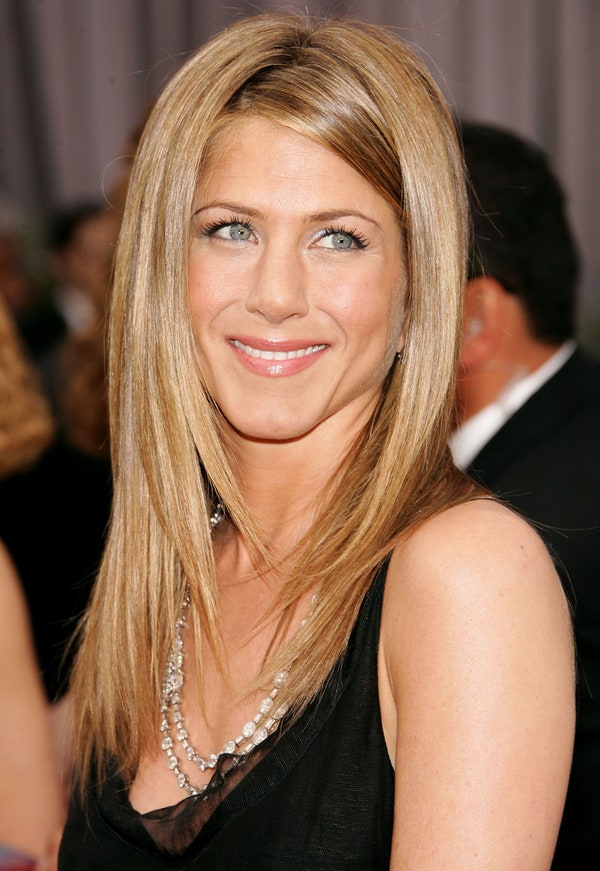 The uncharacteristic low, off-center updo she wore to the British premiere of Along Came Polly made her an unexpected Amy Adams doppelgänger. 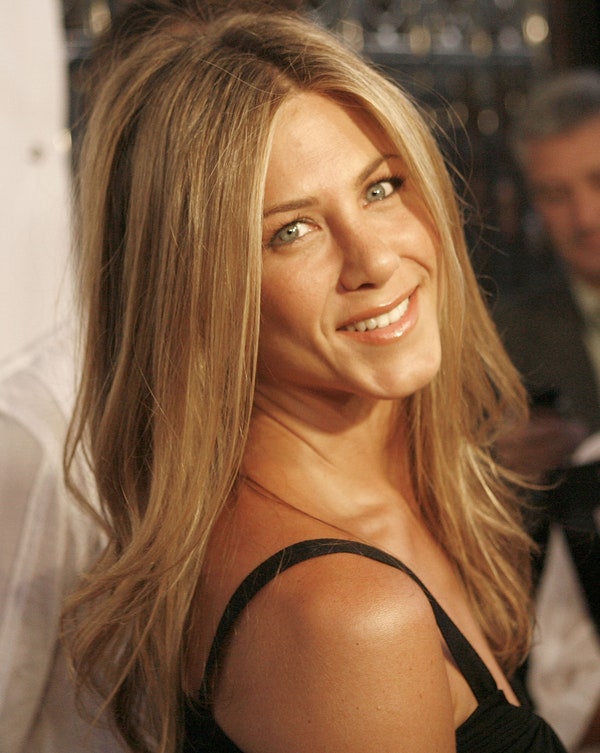 Eventually, though, she always gravitates back to super-simple and pretty, like this lovely side-tuck for the Academy Awards. 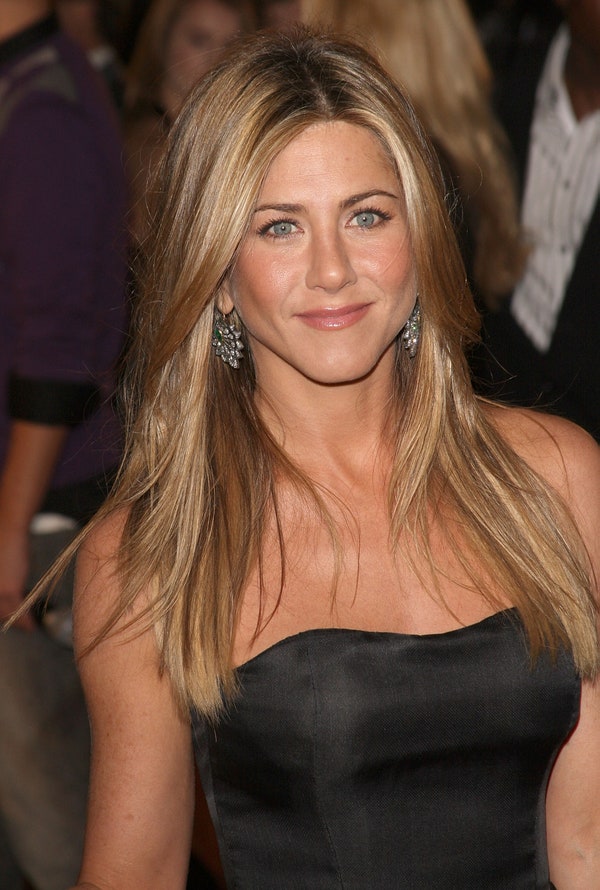 The definition of hair flirting: this beachy-sexy texture—complete with over-the-shoulder gaze. 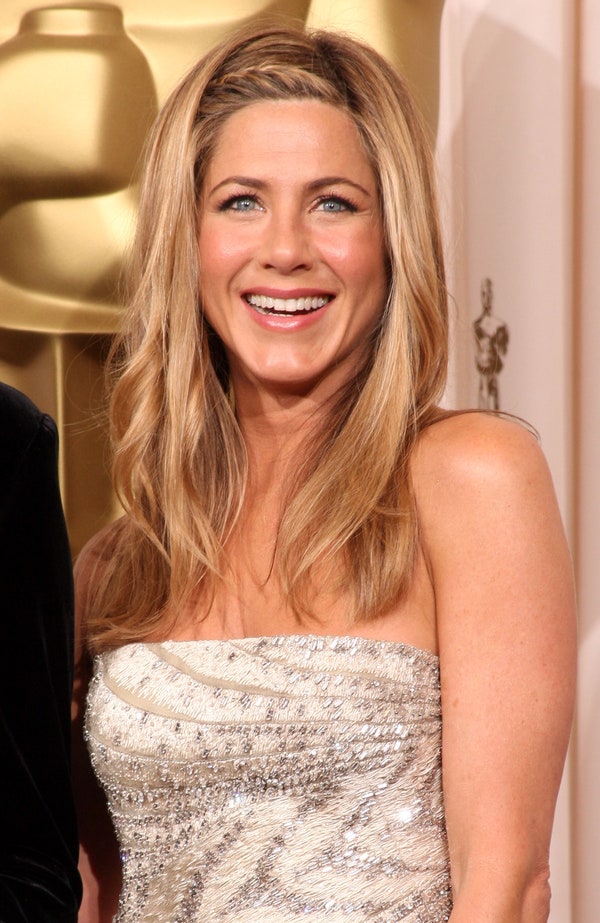 Around this time, Aniston became the unofficial queen of blond highlight goals. 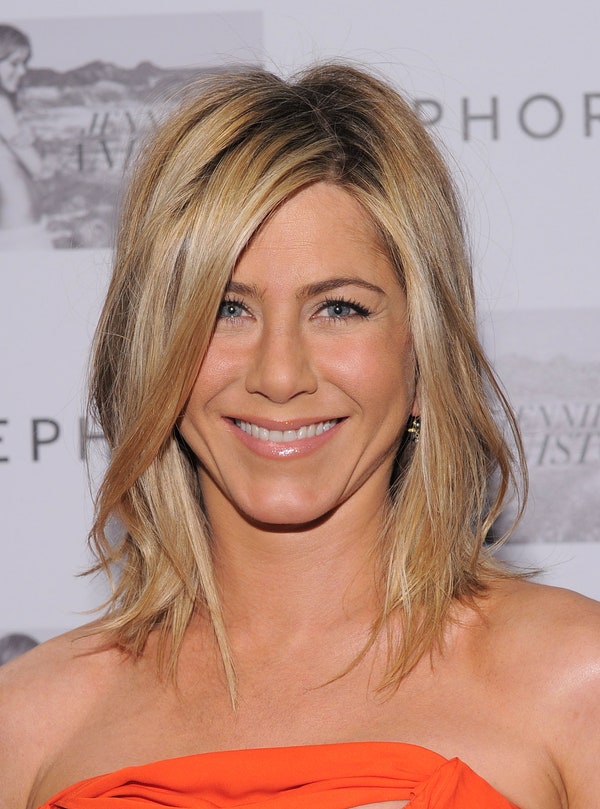 She mixed up hair down with a sweet accent braid at the Academy Awards. 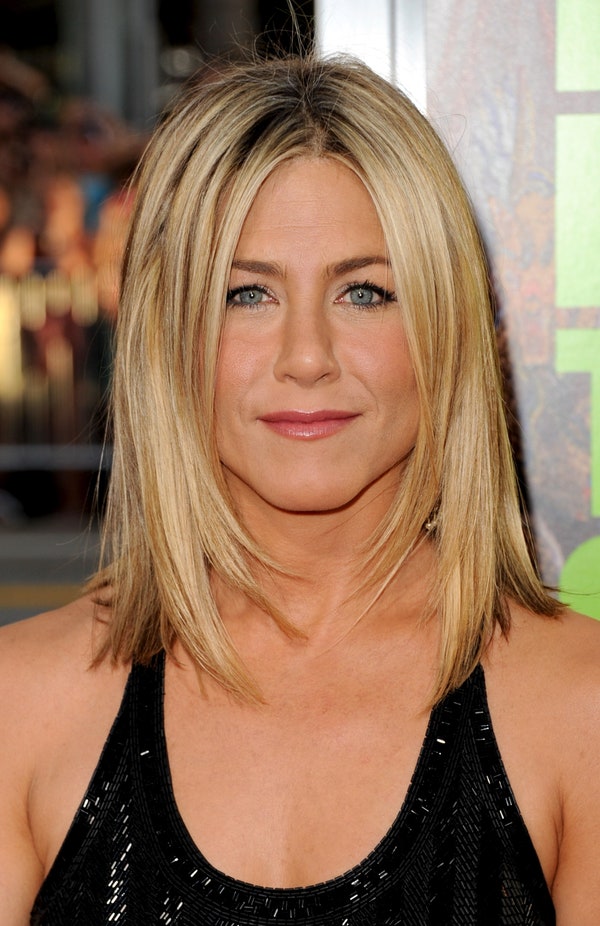 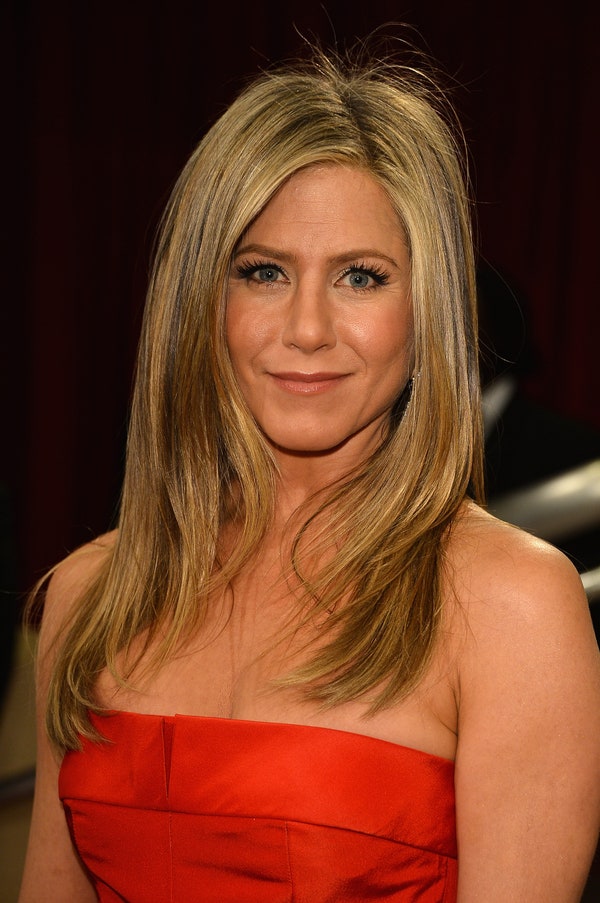 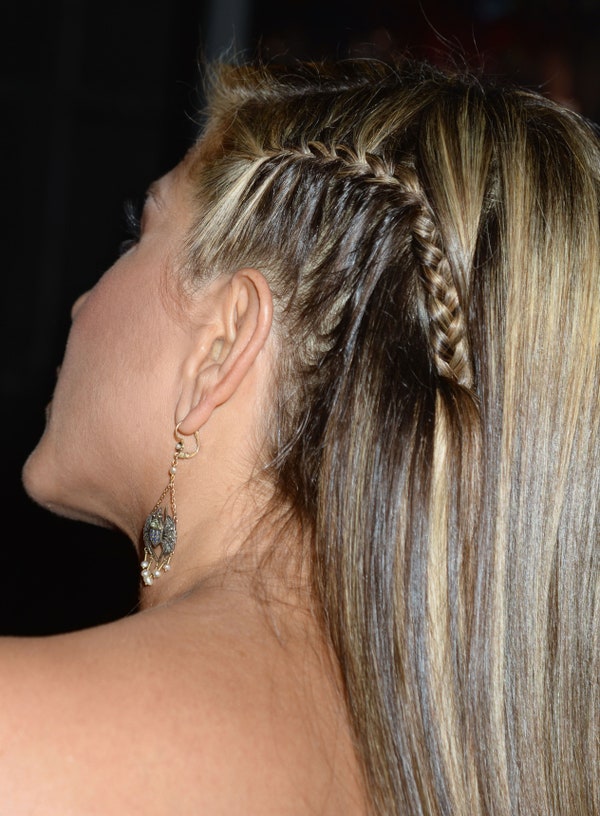 After that, she recommitted to her signature long, straight blowout with face-framing layers. 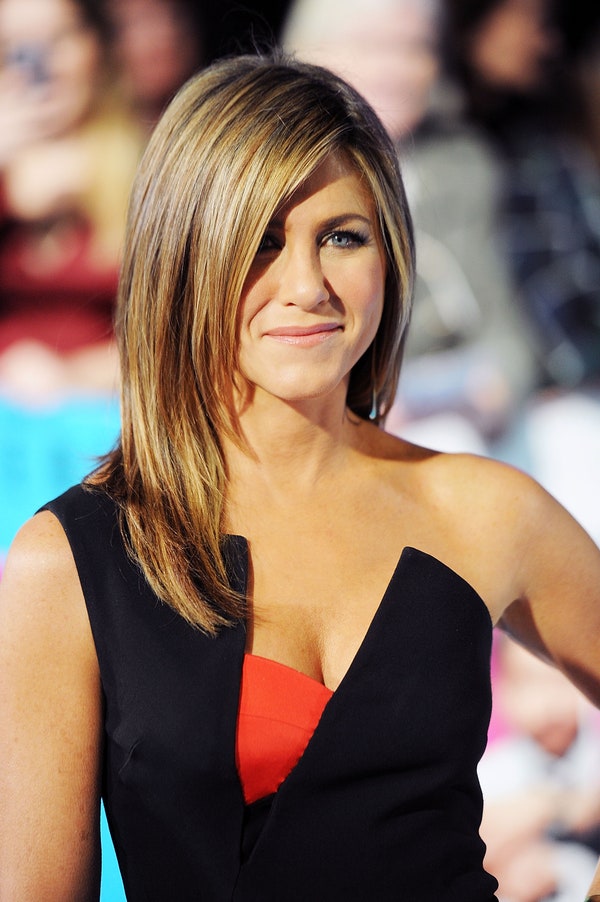 She even wore it unembellished to the Oscars. 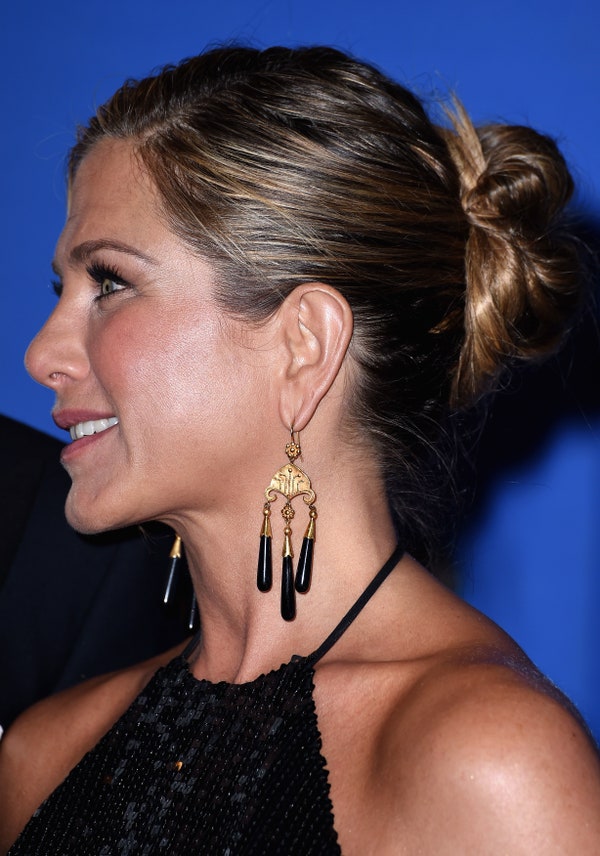 Time for a change: a very cool diagonal-part pony with a face-framing front section left loose. And another! At the Guys Choice Awards, Aniston turned heads with an edgy asymmetrical style involving a tight reverse French braid on one side. We never get bored of Aniston’s default long layers—we’re just reminded of how perfect this haircut really is. 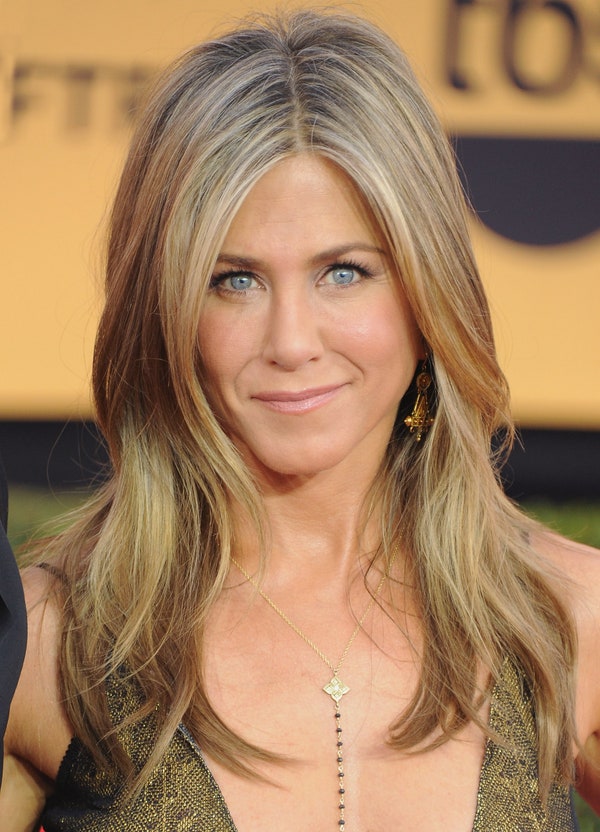 Behold, another rare updo sighting, this time a snug bun at the Golden Globes. 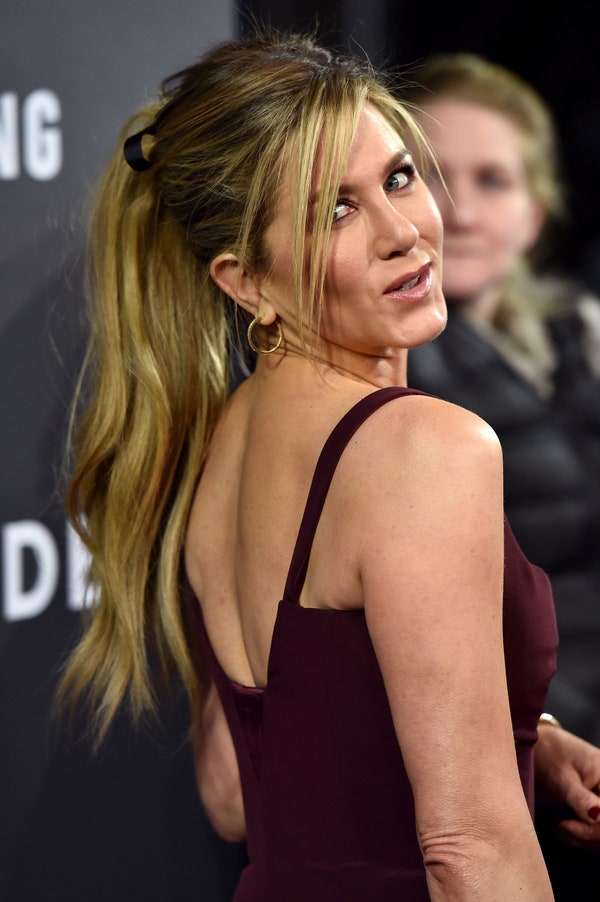 By the SAG Awards, it was back to the loose layers—a little wavy this time. 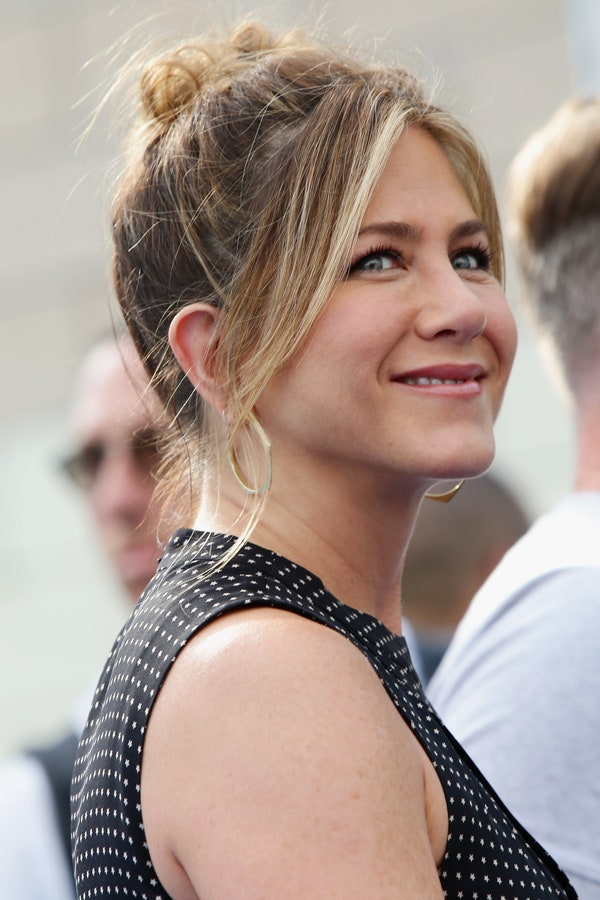 Aniston had a cheerleader moment wearing a high ponytail complete with black ribbon at the Zoolander 2 premiere. 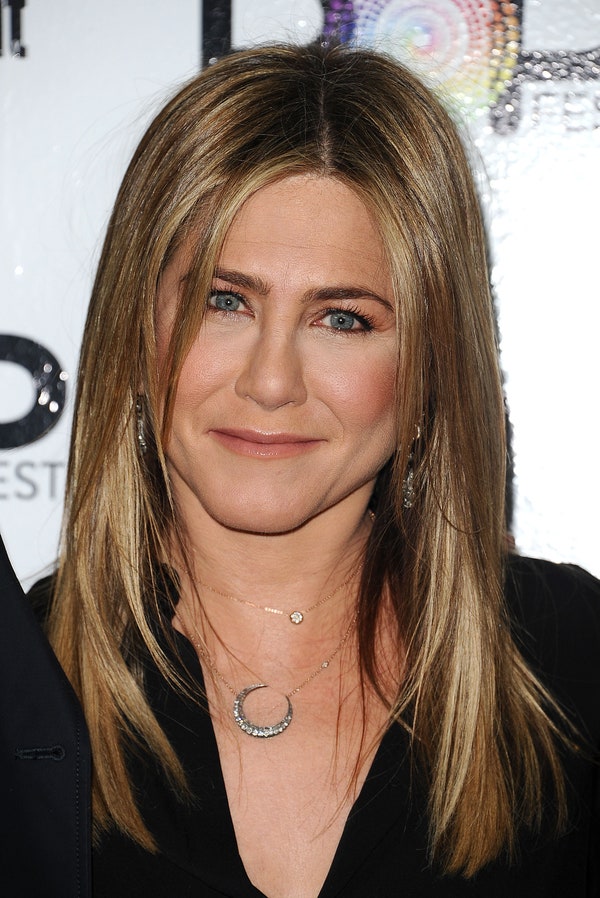 Her ballerina bun with center-parted front sections is so chic we’re left wondering why Aniston doesn’t wear her hair up more often. Although with hair that gorgeous, we’d rarely pull ours back either.

A lesson to us all: Play with your hair, but own your signature style.

Ranking All of Jennifer Lopez’s Rom-Coms